Each year, thousands of Chicago families pin their hopes of a Merry Christmas on “Dear Santa” letters. This year, the need will be even greater. Thousands of Dear Santa letters arrive at the post office and most will NEVER be answered…

But now there’s an answer…

There Really Is A Santa Claus provides a giving experience unlike any other. Thousands of Chicagoans struggle to pay utility bills, put food on the table or purchase a winter coat. Putting a gift under the tree on Christmas morning is unthinkable. There Really Is A Santa Claus provides an intimate, grass roots opportunity to give back to those in need. We give you the opportunity to be as involved as you like – we always encourage donors to purchase gifts, but your involvement can range from donating money to hand delivering gifts. Whereas many organizations have you donate a wrapped gift for an anonymous child, our organization “introduces” you to the child and his/her family. Read the 'How It Works' section and let us know how you'd like to help.

Excerpts from past letters 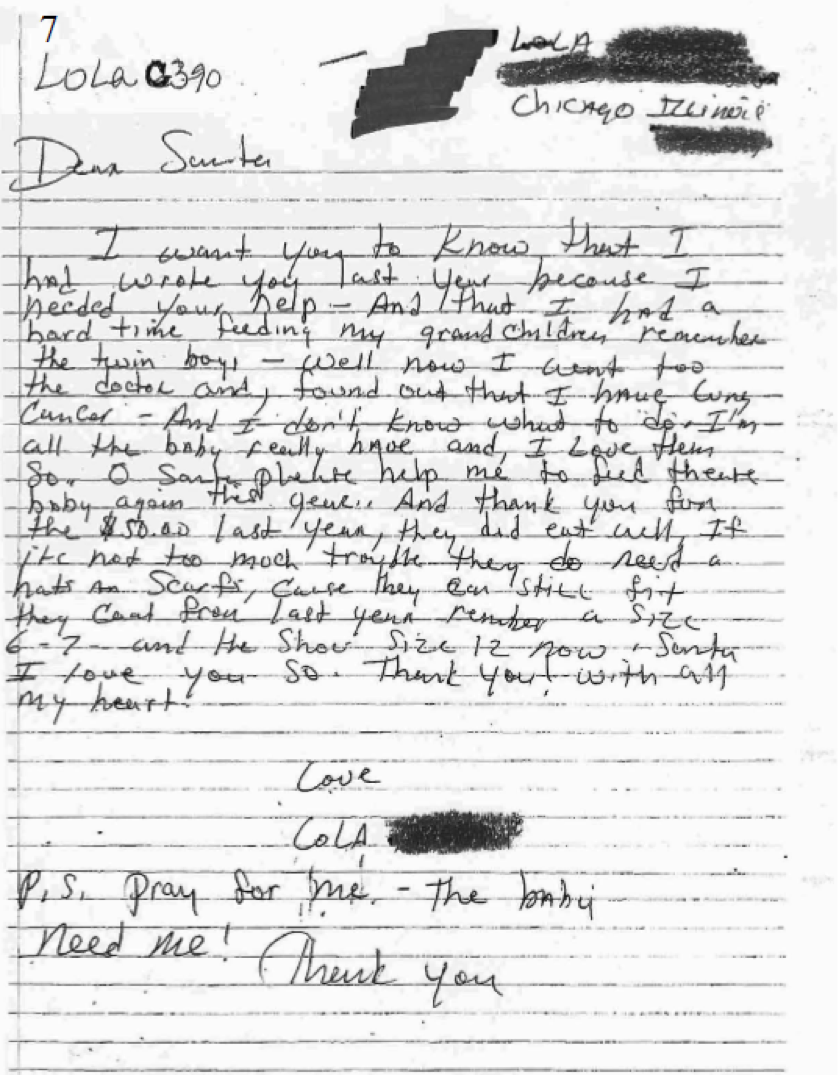 ...found out that I have lung cancer - and I don't know what to do. I'm all the baby really have and I love them so. Oh Santa, please help me to feed the baby again this year. 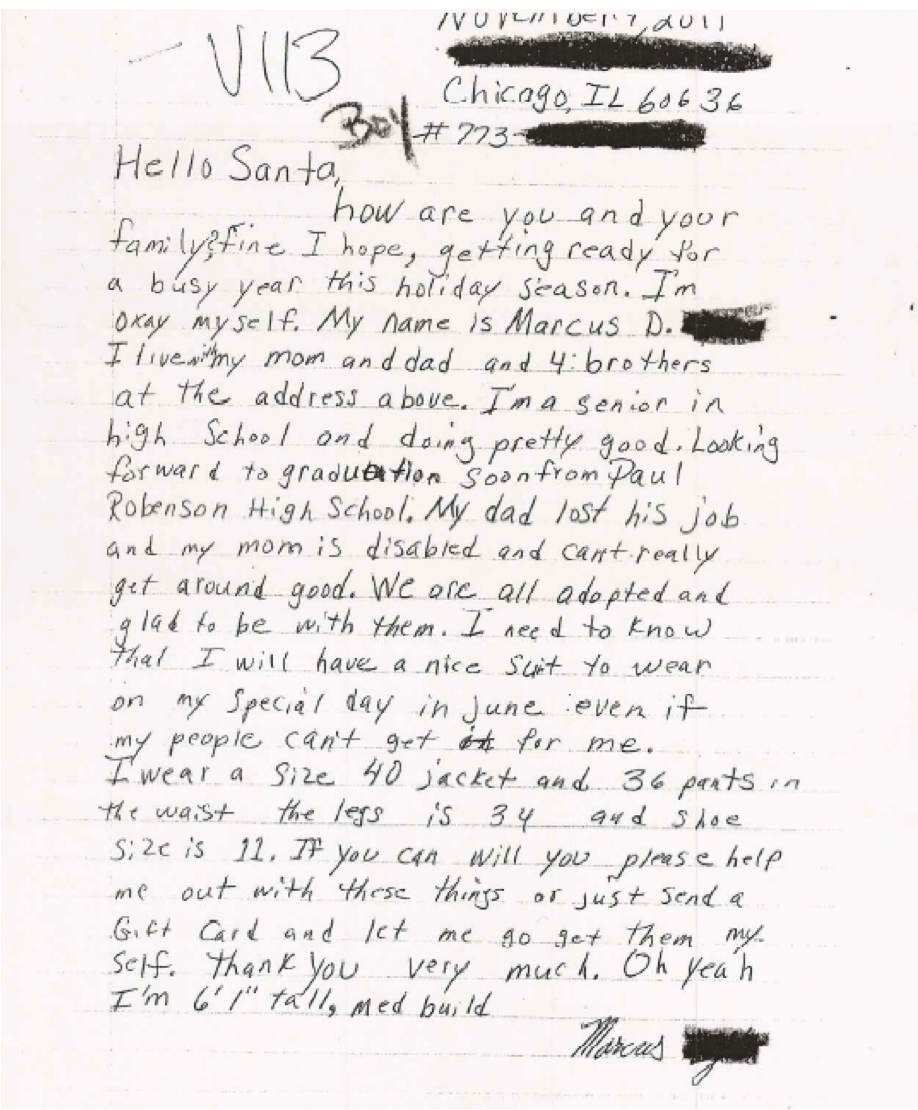 My dad lost his job and my mom is disabled and can't really get around good. We are all adopted and glad to be with them. I need to know that I will have a nice suit to wear on my special day in June.

Over the years, There Really Is A Santa Claus has received some unexpected and unsolicited press. See some of the video clips below.

2018 coverage by local CBS News reporter Jeremy Ross at There Really Is A Santa Claus headquarters on the nights before deliveries.

In 2019, acclaimed documentary film maker Dana Nachman met There Really Is A Santa Claus while filming “Dear Santa”, a heartwarming film about the 100 year old Operation Santa program sponsored by the US Postal Service.

Our grass roots approach is what makes this program so intimate. There Really Is A Santa Claus coordinates and manages all communication with the families. We spend a significant amount of time ensuring we gather detailed information about the families, all of which is relayed to the donors. Simple details such as a kids sizes, school uniform colors or whether or not they have boots that still fit from last year. Through this process we also learn details such as the family needs toiletries, mom needs a bus pass to get to work or the teenage daughter cares for her baby sister every day after school.

There Really Is A Santa Claus chooses families through "Dear Santa" letters. Thousands of "Dear Santa" letters arrive at the Main Post Office each year and most go unanswered. The selection process is one of the most significant activities we do, putting an inordinate amount of effort into selecting letteres from only the most deserving families.

There Really Is A Santa Claus speaks with every chosen family and relays their stories to you. We inform the families that will be purchasing gifts for them and determine what their true needs and wants are. We also use this opportunity to verify legitimacy. During this process we tipically learn so much more about them than their letters divulge, and we pass this information along to you.

We assign you to a family member(s) for whom you will purchase gifts. What specific gifts you purchase will be at your discretion - warm clothes, household essentials, toys, gift certificates, books, whatever you're inspired to do. And if donating money is what suits you best, we happily accept cash donations and you will still be assigned a child or family in need(one of our wonderful volunteer shoppers will purchase gift(s) on your behalf).

After the gifts are purchased, we take care of everything. There Really Is A Santa Claus wraps, communicates with and personally delivers gifts to all families. But we'll ask for your assistance if you're interested. It's a fun few hours of manic-ness at Santa's workshop, but it gives donors an ever greater appreciation for the efforts.

The Directors deliver gifts to the recipient families. And that is one more thing makes our program so intimate...we get to literally shake the hand and personally hug the families we have collectively helped. It never gets old seeing the joy on the families faces and is a blessing to know we have made a difference in their lives.

Our Board of Directors(before it was our Board of Directors) purchased gifts for first Dear Santa family. The experience overwhelmed our conversations with family and frineds that entire holiday season and the vision of There Really Is A Santa Claus began to take form.

There Really Is A Santa Claus was officially incorporated as a 501(c)(3).

The efforts of There Really Is A Santa Claus and our over 100 donors raised greater than $10,000 for Chicagoland families.

There Really Is A Santa Claus celebrated its Tenth Anniversary with it's biggest year yet - $27,000, 40+ families assisted and a segment on CBS news.

There Really Is A Santa Claus celebrated its biggest year yet - over $50,000 raised, 50 families assisted and segments on NBC, ABC7(streaming on TaxiTV) and CBS2 news (for the third year in a row).

Sixth year in a row exceeding $40,000 of gifts purchased for Chicagoland families.

The families we meet and stories we hear each year never cease to enlighten us. Over the past six years, There Really Is A Santa Claus has purchased $250,000 worth of gifts for 250 families and 1,250 individuals, through its network of almost 1,000 donors.

Other ways to contribute this holiday season